An Easter Egg is a hidden feature or novelty that the programmers have put into their software. It can be an image, sound or movie sequence and are hidden to some degree. Some Easter Eggs can be seen during the course of a game but some are deeply imbedded and may require very specific steps to find them. To view the best hidden eggs in RIVEN (see The Real Easter Eggs) you have to move through the "Click Spots" hinted to at the Spyder Pages. 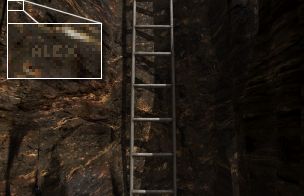 This text can be found in the top left corner of a screen with the ladder going up to the spherical trap at Boiler Island. Robyn Miller has now confirmed that Alex is the name of one of his children who wandered into his office one day while he was doing some minor retouching on some images.

Children in Cliff Side

If you look over the cliff by your starting point, and look up in the top left corner, you will see an image of two children. These are Robyn Miller's children, Grace and Alex. They are only visible when 'Cho' is gone. 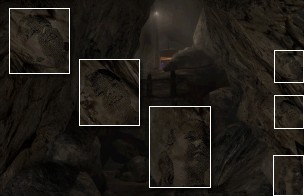 On the first screen upon your entry into the hidden passage (after you crawl under the locked doorway), you can see Rand's three daughters; Kinslee, Kerryn, and Kara on the right hand side in the rocks. The children's faces only appear when the doorway to the rotating room is not blocked. 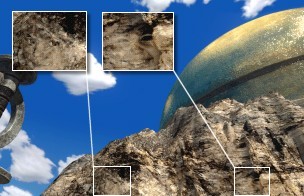 In the beginning of the game, turn left and look up after exiting the cell. On the bottom border of the screen you will see two children's faces. They are Richard van der Wende's two daughters Helen and Evelyn. These images was hidden by Richard himself, and they are probably the best hidden of the three groups of kids.

While you are making your way through the Click Spots in hunt for RIVEN's Real Easter Eggs (look below), you will find an unusual view. After taking the sub to the Bridge Controlling Room on Jungle Island and looking out of the the little hole, you can see the sub back at it's starting place on top by the village. 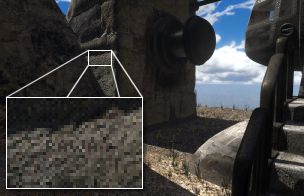 Near the maglev landing on Temple Island you can find these tiny letters printed on a rock. The signature belongs to RIVEN's Lead Programmer and D'ni Historian Richard A. Watson. If you are a subscriber to The RIVEN Lyst you probably know that Richard is a colorful person who cares about the fans. Richard has said that he put the letters in himself. He also states that others may have put theirs in, but that he don't know about any.

RIVEN's Real Easter Eggs is eggs that is much better hidden than the eggs above. To find them you have to follow the steps described on the Spyder Pages. Spyder is now finished giving us all the clues, so now it is only the search for the eggs left. Some have figured out the way to view three of them. To view these, you first have to click through the Clik Spots. Click once on each of these objects:

Then you have to go to the places described below, and then see the eggs for yourself (highly recommended). 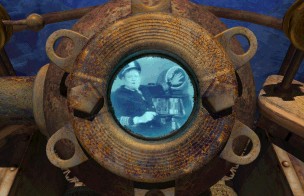 This movie can be accessed on the left viewer at Gehn's Underwater Throne on Survey Island. Sit in the chair and hit the button to face the window. Pull the left hand lever and then look down at the view screen. Finally, click on the small round, brown bolt just off to the right of the view screen to view the movie.

The movie is a splice of two old TV commercials. The dialogue says:

Narrator: "Instructions on self defense in every packet..." Sailor: "Hello there. You know, I've been all around this wonderful world of ours, and in all of this world, nothing else is silly putty."

The first part of this movie is a commercial from the late 1960s for a men's cologne called "Hai Karate." Supposedly, this cologne made men so attractive to women that it came with a self-defense manual to fight them off. In the first part of the spot, a very mild-mannered, nerdy guy puts on the cologne, and his date immediately goes wild. The ending, which we see in this egg, is him trying to save himself from her. The actress is Valerie Leon, who used to appear in the old "Carry On" films where both her natural assets were used to full advantage.

The second part of the movie is a Silly Putty commercial from the 1950s. Silly Putty was originally supposed to be a revolutionary compound that was used during war-times (i.e. substitute for rubber tires). An accidental mixing of compounds in the lab produced the toy most americans know of today as "Silly Putty." In Europe this rubber like clay is also known as "Wonder Plast." This scene was probably a pre-emptive wartime newsreel lauding the benefits of such a substance, before someone fudged up in the laboratory. If you want even more info on Silly Putty, have a look at this.

This Easter Egg was made by Michael Sheets who was on the development team for RIVEN. It came about as he was working on the movies for the scopes in the Wahrk room. He had set up a project in "After Effects" that provided lens distortion, color and other effects for the movies of Catherine in her "prison." He needed a movie to test the effects setup with, so he used this commerical from the 1950s that he had on a CD.

In this movie Gehn (John Keston) shows us one of his hidden talents. After clicking the center of the star on the wall carpet in his bedroom, Gehn walks in from the right and sings us the first verse of the famous italian 'O Sole Mio (lyrics by Capurro, music by Di Capua). This is the part Gehn sings:

Richard A. Watson at Cyan has told us that when they were doing the filming for Gehn's speech, John Keston suddenly burst into song, the cameras kept on rolling and they decided to keep it an as an easter egg because it was so good. 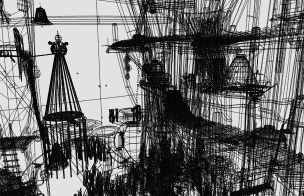 This picture can be seen by the village on Jungle Island. Walk from the place you first find the sub towards the hut where you can knock on the door. When you are looking down the ladder, turn right and you will see this easter egg. The picture shows the wireframe version of the landscape surrounding the lake.

A Walk in the Sky 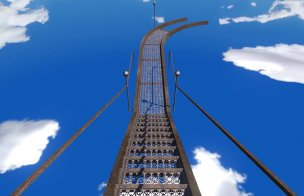 If you walk into the jungle on Jungle Island, take the wahrk totem elevator all the way up and then walk past the dome and up towards the control throne. When you are about the middle of the stairs, turn around to face the dome. Down on the path underneath, you can see some lights by the side of the path. Click on the light farthest away from the dome to see the egg. 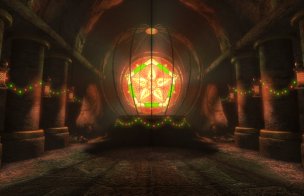 This picture can be seen in Gehn's Temple Room on Temple Island. To turn on the lights you have to stand as close to the exit to the maglev station as possible. Then click on the second lamp from the left, and viola! The view will definitely bring you in the right spirit.