These are two of the look up shots that most players don't notice. The first can be seen from the gears on MYST Island. To see it, go to the Marker Switch at the big gears, turn left and look upwards. The second shot is from the Lighthouse in Stoneship Age. All you have to do is stand before the lighthouse and look up. Thanks to Sebastian Ochs for pointing these out. 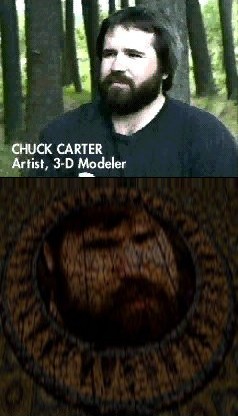 In the center of the floor in the D'ni Age there is a mosaic with a face in it. Many players supposed this was a picture of Atrus, but in fact it shows an old D'ni writers guild master, named Ri'Neref (D'ni was not designed by Atrus, but where his ancestry came from). The face in the mosaic is actually Chuck Carter (a real person) who worked on MYST and made the model of D'ni. The top right image is Chuck Carter talking in the "Making of MYST" movie. The other two images are from the game, and shows the picture of Ri'Neref from two different angles. 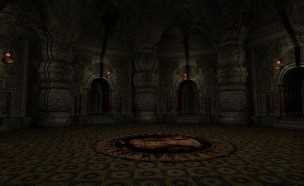 In his speech to Catherine, Atrus says that she should erase the message after hearing it. You are not required to erase it, but it is a fun thing to do. To erase the message enter the number of marker swiches on the panel downstairs. Push the red button and wait untill the beeping tones go higher. Quickly, press the red button again, and you will hear a chiming sound. Now you can go to the pool and try to view the message. It is gone! You can do this with the other "messages" too.

Looking down into Caldera 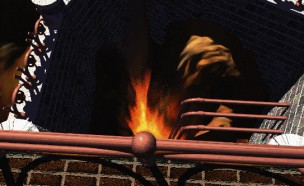 This is a view that many players don't notice. In Selenitic Age, look over the fence by the crack symbol. Here you can see why this symbol is formed as it is. 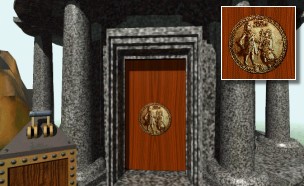 This Medallion seems to appear very often in MYST. You can find it on the planetarium door, on the ship, on the door handle to the room on the ship where the book to Stoneship can be found, on the chair where the book to Stoneship lies, on the furniture of Sirrus' room in Stoneship, and probably also on the coins in Mechanical Age. I think medallion shows two people in front of each other. It is difficult to see what they are doing, and it is not known who these people are. A theory is that this is the medallion a D'ni gets after his completion of his first Age. This ceremony is both described in The Book of Ti'Ana and The Book of Atrus. Thanks to Sebastian Ochs for help on this one. 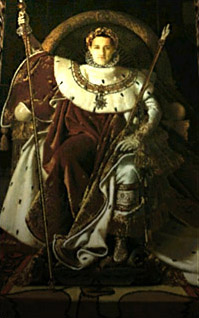 Have a look at the wall near Sirrus' throne in his room in Mechanical Age and you will notice a painting quite similar to Jean Auguste Dominique Ingres' "Napoleon on his Imperial Throne". It's not exactly the same though. If you look even closer, you will see that Napoleon's face has been replaced by the face of Sirrus! Robyn Miller explains that they put Sirrus' face there to show the character's elegance and lust for power, in a funny sort of way. Thanks to Zach Charland for pointing this out and Robyn Miller for explaining the alteration. 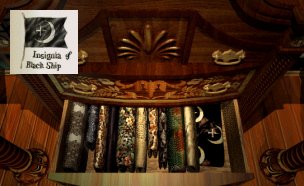 If you go to Stoneship Age and look in one of Sirrus' dresser drawers that is filled with rolled up fabrics, you will see a scarf or bandana that is black with a white crest on it. If you have read the story about the "Black Ships" in the Mechanical Age journal, you will see that the insignia on the the Black Ships flags match the symbol on sirrus' handkerchief. Maybe this means that Sirrus could have been one of the black ship pirates, or maybe even their leader? Thanks to Vanguard for pointing this out. In the MYST comic book "MYST - Book of the Black Ships" you can read about how Sirrus and Achenar becomes pirates on a Black Ship. Necromancer sent me a resume of this cartoon. 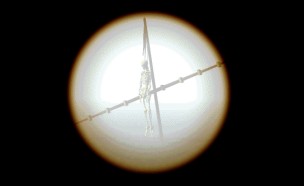 This image can be seen in Mechanical Age. If you turn the house 180 degrees from the starting position and then use Sirrus' telescope, you can see this skeleton hanging from the top of a boat's mast. Interestingly the direction the telescope is pointing when you see the hanged man is 135 degrees (southeast), the same direction as you see the lighthouse in Stoneship Age. Richard A. Watson at Cyan has told us that the skeleton (nicknamed "Bob") was a member of the crew of the Black Ships. The exact reason for his being tied to the raft and left to wander the seas has long been forgotten.

While playing the MYST Island fly-by, the large gears accross from the dock are wide open. When you link through to the Island, however, the gears are closed. OOPS! Thanks to Alahmnat for pointing this out. 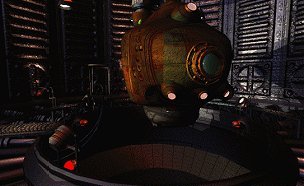 A thing many players don't notice is the fact that you can walk around the mazerunner vessel on Selenitic Age and look at it from different directions. Here you can see it from two of these angles. Thanks to Sebastian Ochs for pointing this out.