This image is taken from Cyan's main MYST page. It is a new rendering of one of the valves in Channelwood. The valves was used to redirect water to give power to different engines.

The first image shows Catherine's note to Atrus. The note is crumpled, and is a view that can't be seen in the game. The second picture is taken from Cyan's MYST images page. You can see the crumpled note lying on the ground. These pictures is probable early screenshots, that later were removed from the final version of MYST.

After corresponding with Robyn Miller who has been generous enough to let me share some of the files from his vault with you. More of these can be found in RIVEN pictures not apperaring in the game

When MYST and RIVEN were in the makings, Robyn sometimes used Adobe Illustrator either to work out his designs, to create cleaner versions of previous designs, or even to establish flowcharts of the entire game. 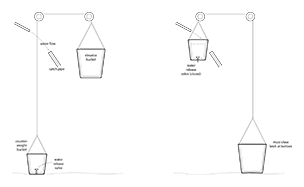 Robyn: "This was an early design for the Channelwood age. It was never used. I think a tiny picture of this apparatus appeared on our game proposal which I posted on my tinselman blog at one point."

The MYST Screen Saver CD-ROM was released for Windows 3.1 in 1995 and contained several slideshows. Two of these, "New Views" and "Making of MYST" contained images not appearing in the game. You can see all of these images below.

The '96 calendar had pictures of MYST, plus new excerpts from some of Atrus' other journals.

The '97 calendar had all new pictures of the MYST Ages (plus one of RIVEN) taken at different times of day. 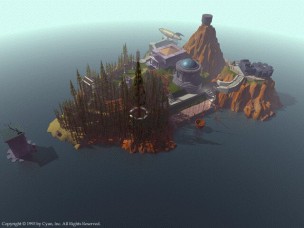 This image is the same as the one on the front page of the 1996 MYST calendar. This image suits the desktop background on your computer extremely well. Click the image to get the full size version.

The left image is a screen shot from MYST. It is a picture of the yellow checker-box in Sirrus' bedroom in the Mechanical Age. In the game it can't be opened. To the right you see an image of the same box, but this time it's open. If you look closely, you will see that it looks like an old fashion music box inside. I don't know if this is an undiscovered easter egg, or if it is an image published by Cyan after the game release. The picture looks very real so I believe it's not a fake.

Update 2020-09-15: David Evans reached out to tell his story regarding the open music box:

"Back in 1993 when Myst was released I was working at Apple as a relatively new engineer on the Macintosh team. When I played through I noticed a glitch on the music box in the mechanical age, that it was a hypercard clickable item but it didn’t do anything. Because I was already often debugging apps for new versions of System 7, I dropped into the hypercard debugger and took a look at their code. There was a typo in the logic and a comment even in the code that it had been changed at the last minute (the 'beta 6' build perhaps? My memory is spotty after so many years.)

So it seemed the intent was to allow the Music Box to be opened to see the inside view, but a last minute change to the hyperscript broke the behavior and it wasn’t caught before launch. I sent a message to the authors with what I found including a fix for the hyperscript that I tested, so the box could be opened. I got a nice thank you note back, I think from Rand, saying that I was the only person to not only send the bug report but also to send the actual fix for the bug."

This maze was in the beginning meant to be in MYST, but Cyan later decided to leave it out. It was done because it was a very complex 3D model to force on the Quadras Cyan were using to render MYST. Chuck Carter said on his web page that once he told Rand and Robyn how long it would take to render all the necessary screens for the walking maze, they decided to scrap it and go with the much more compact and quickly-rendered mazerunner system.

This is another view of the Windmill in Channelwood Age. The image could be purchased as a poster at Cyan's store, but is no longer available.